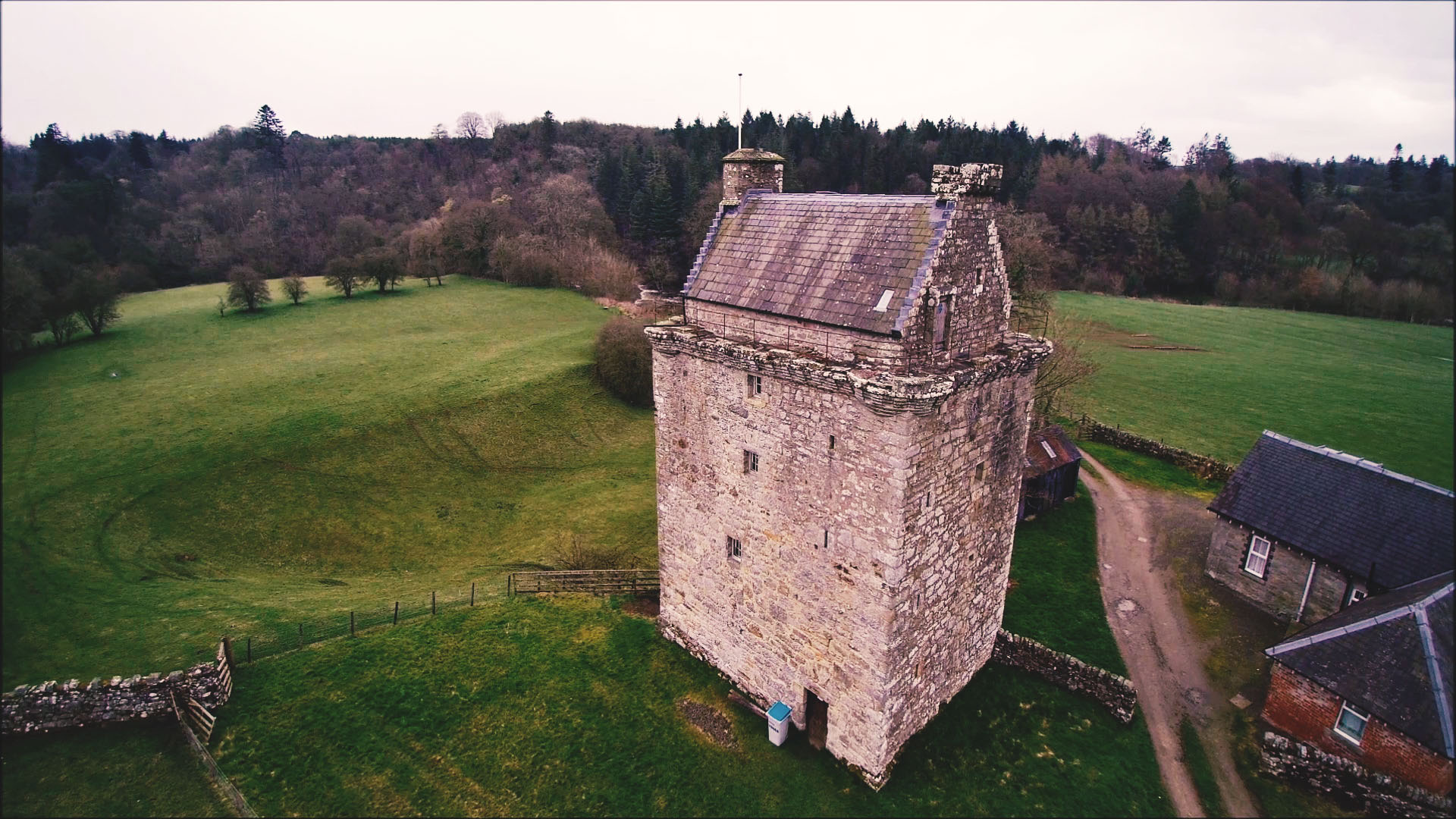 Home of the Clan Armstrong Centre. 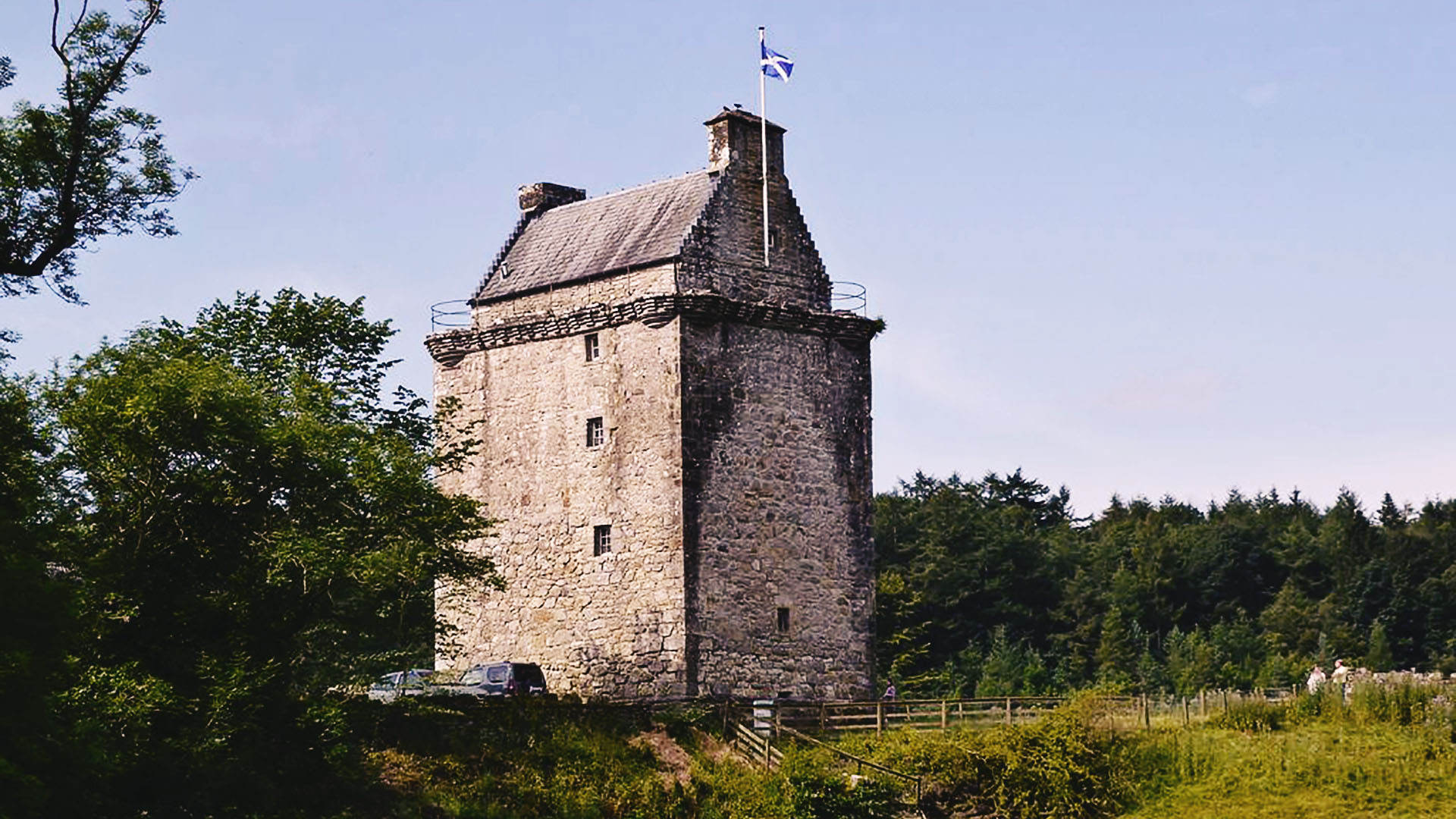 Gilnockie Tower is one of the finest examples of a 16th century pele tower. 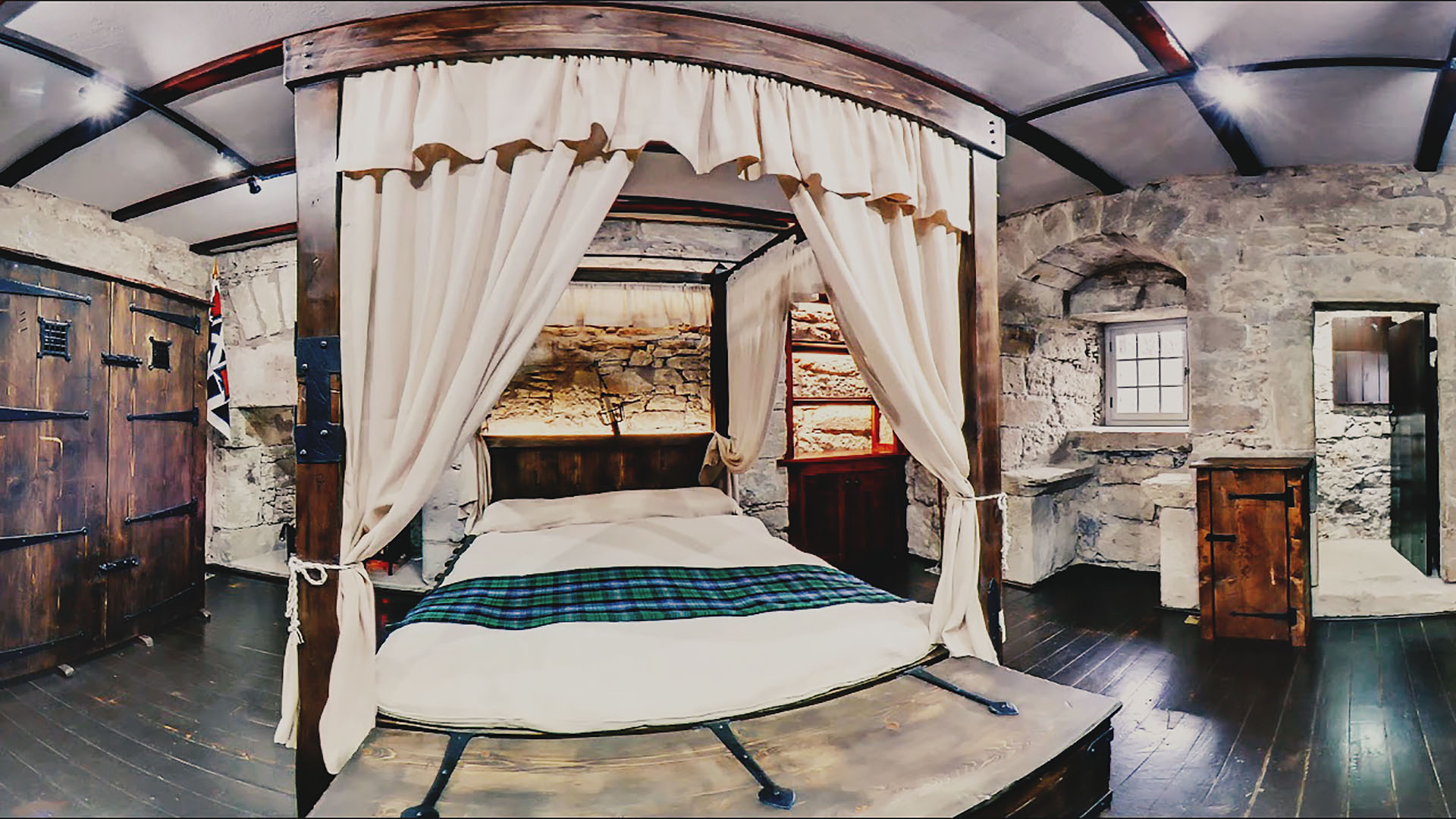 The Turbulent Heritage of the Clan Armstrong's Past

Join us at Gilnockie Tower, a 16th century Scots Tower House, located between Canonbie and Langholm, adjacent to the Border Esk river on A7 Carlisle to Edinburgh route.

A recently repaired, rubble built, 5 storey residence that allegedly supported the nefarious activities of many organised crime syndicates, extending back in time over 500 years.

Entrance to Gilnockie Tower remains controlled by Covid 19 restrictions, masks and the use of hand sanitiser are mandatory for the moment, please.

Discover a treasure trove of fascinating objects and art inspired by those who have over the years, followed in the Anglo-Scottish Border Reiver footsteps.

Guided Tour Premium, your own guide to help you through the building explaining what the Gilnockie Tower was like in the 16th century and how it has been repaired over the last three years (per tour)    £20.00
(Please book Guided Tours in advance by phoning 013873 71373 or Mobile 07733 065587)

Groups consisting of eight or more visitors will receive a discount equal to one visitor at the lowest cost entry charge.

Children under 16 years of age must be escorted by an adult at all times.

Last tour of the building must commence no later than 30 minutes prior to the advertised closing time. 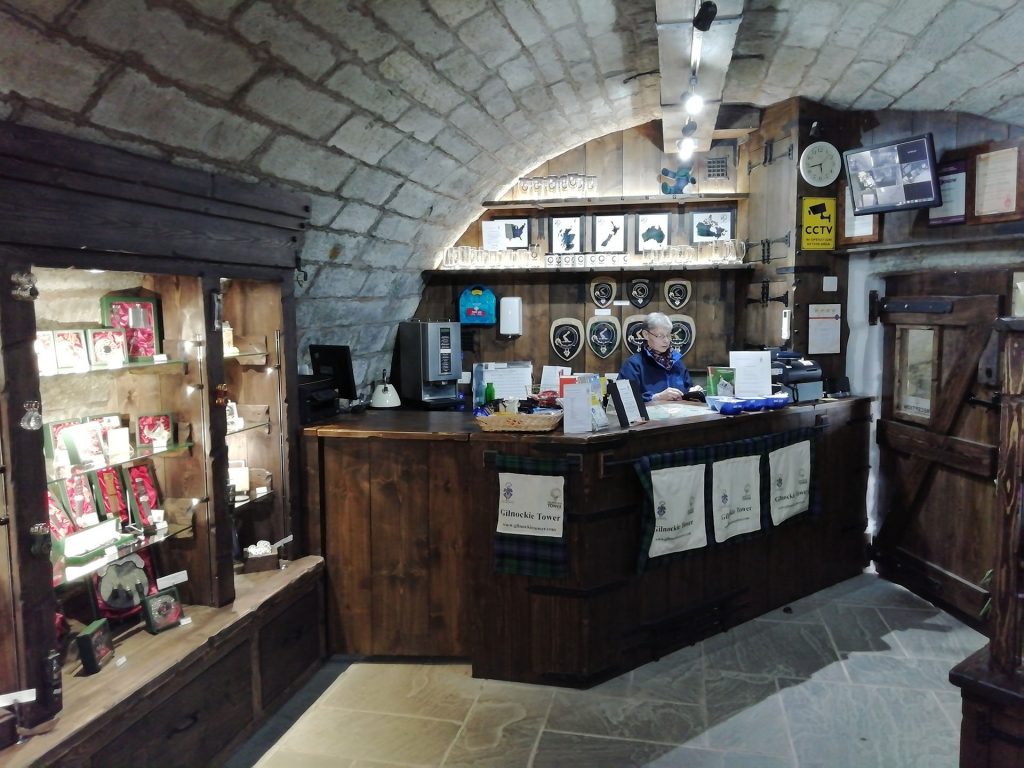 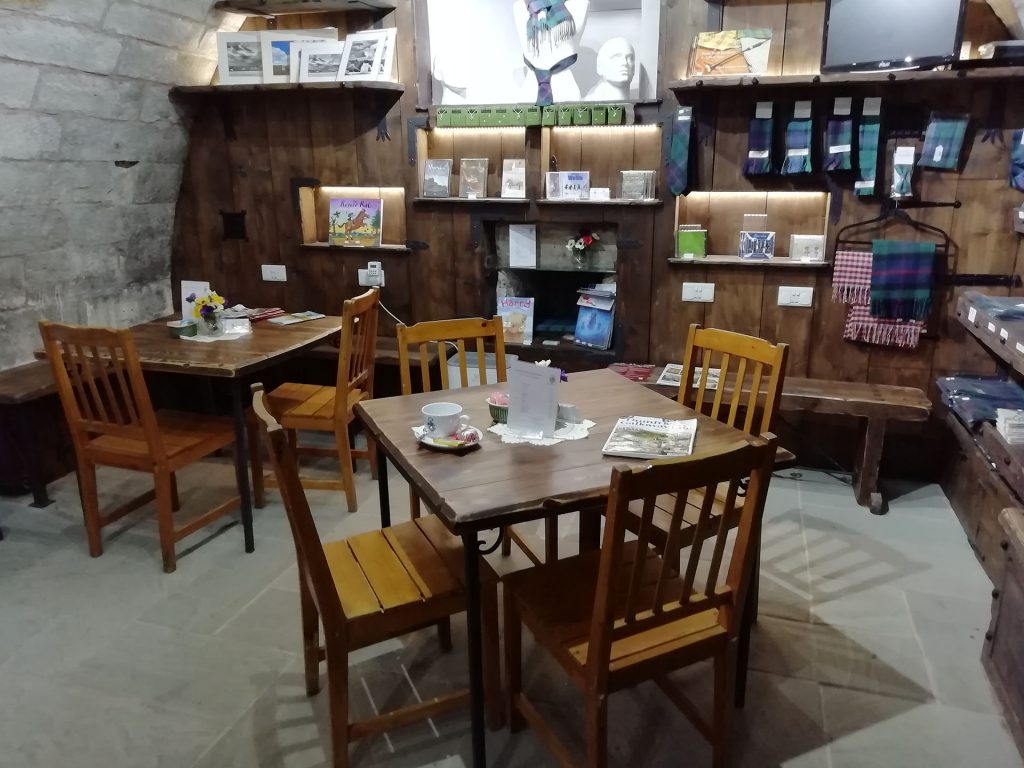 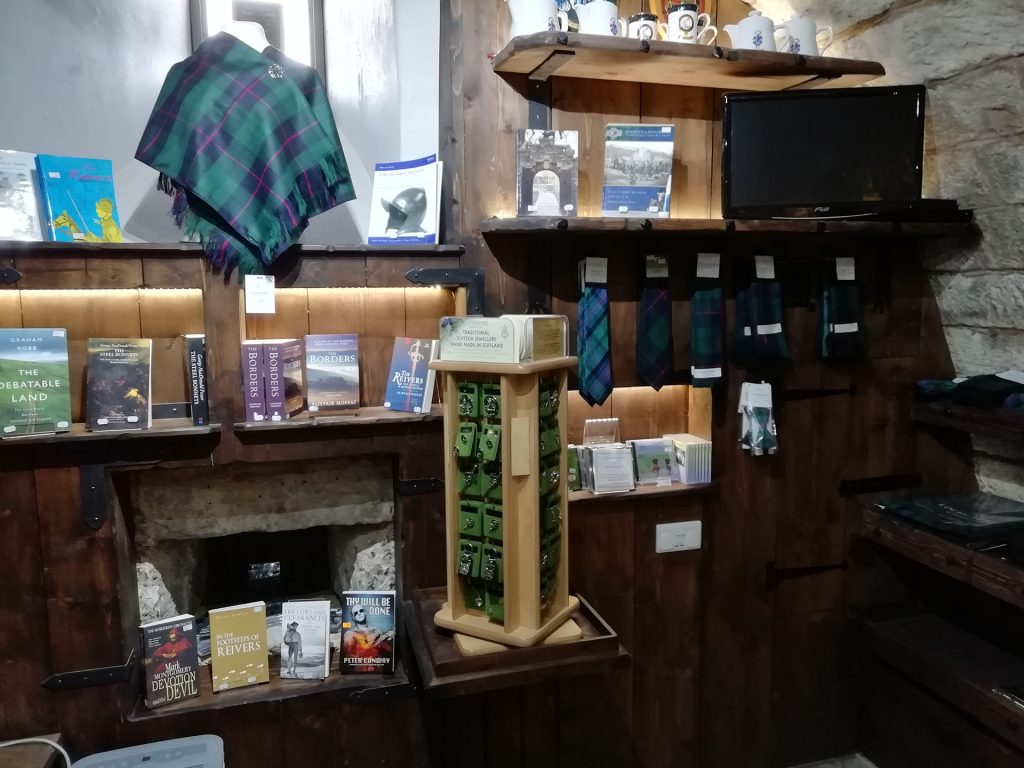 A Guide for 21st Century Reivers:

Gilnockie Tower was reputedly used on occasions as the headquarters, a meeting place where the resident Border Reivers and their collaborators planned and executed gainful raids within national locale of the Anglo-Scottish Border. An inclusive and extremely dangerous part of day-to-day life in the Esk Valley.

500-years-old it stands in an area known as ‘the Debatable Lands’, because, in times past, no-one knew if they belonged to England, or to Scotland. 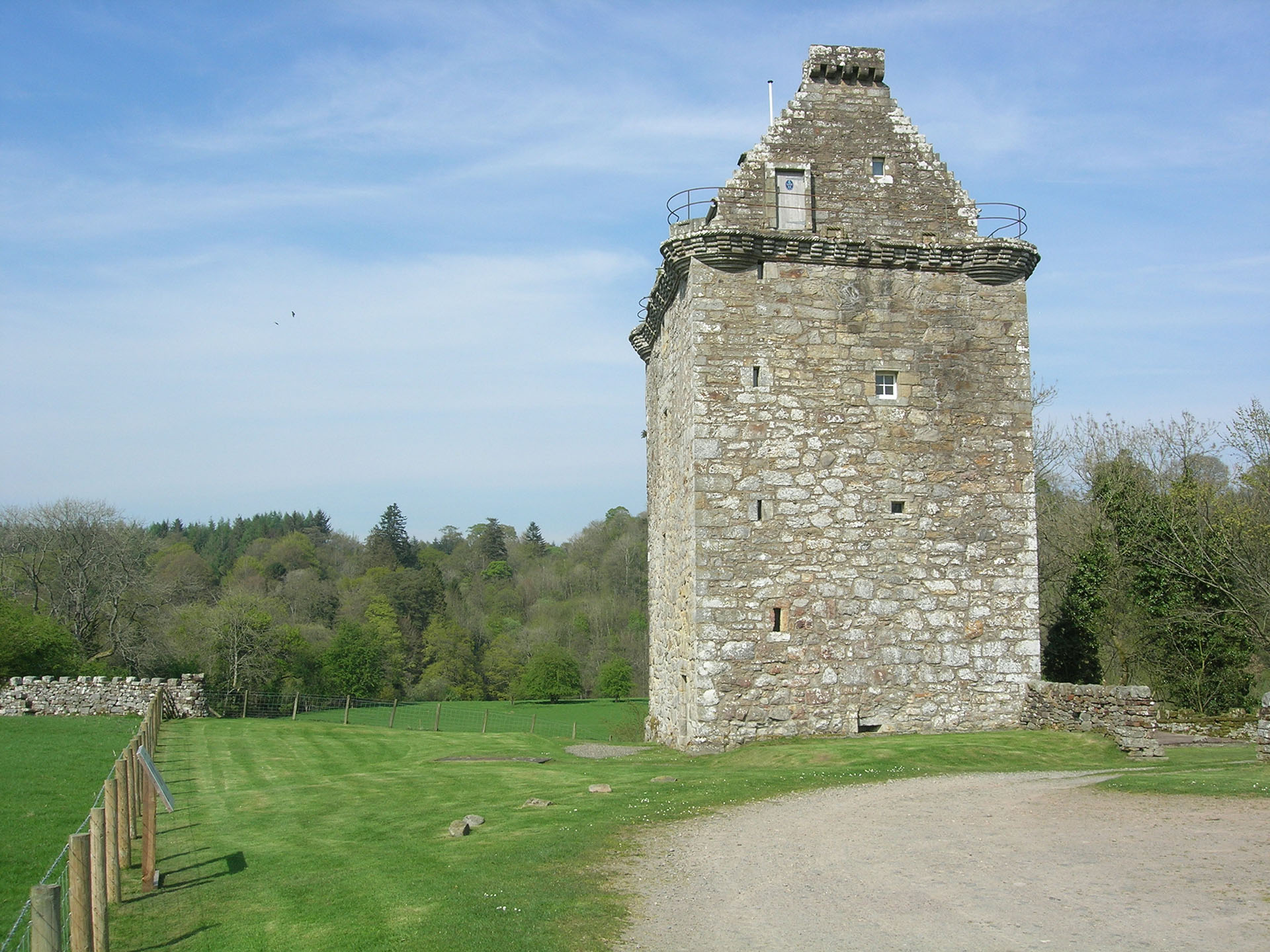 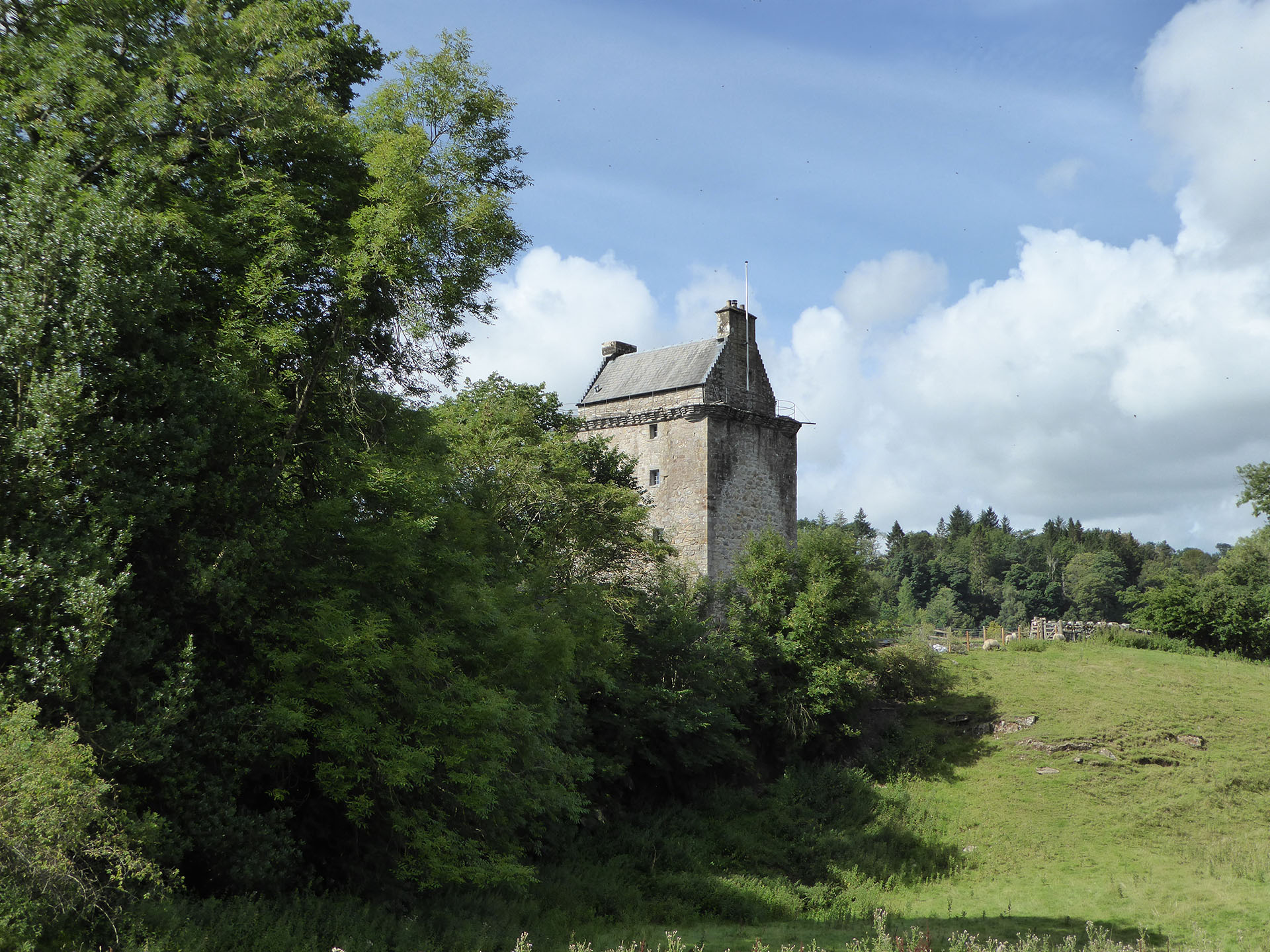 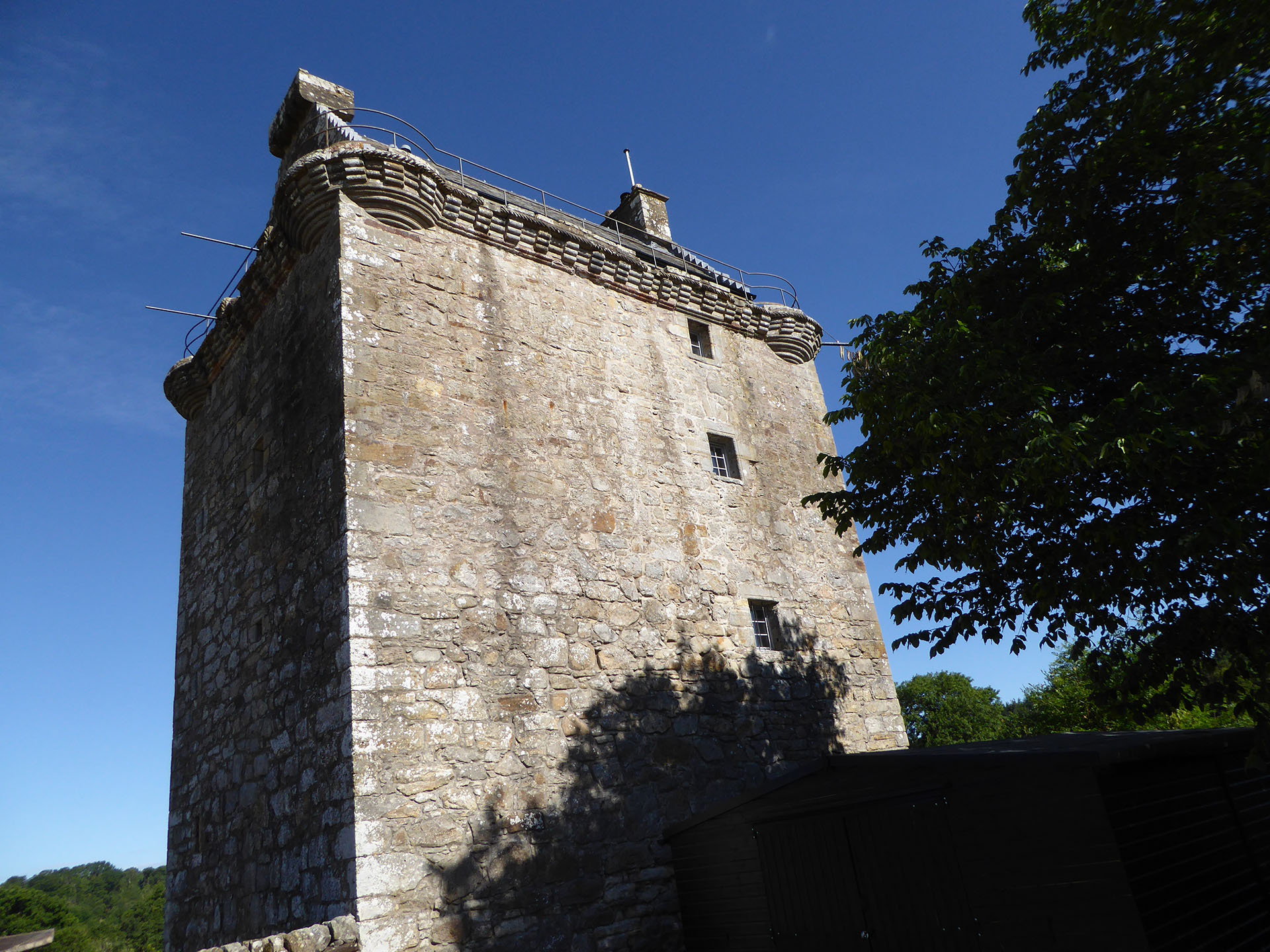 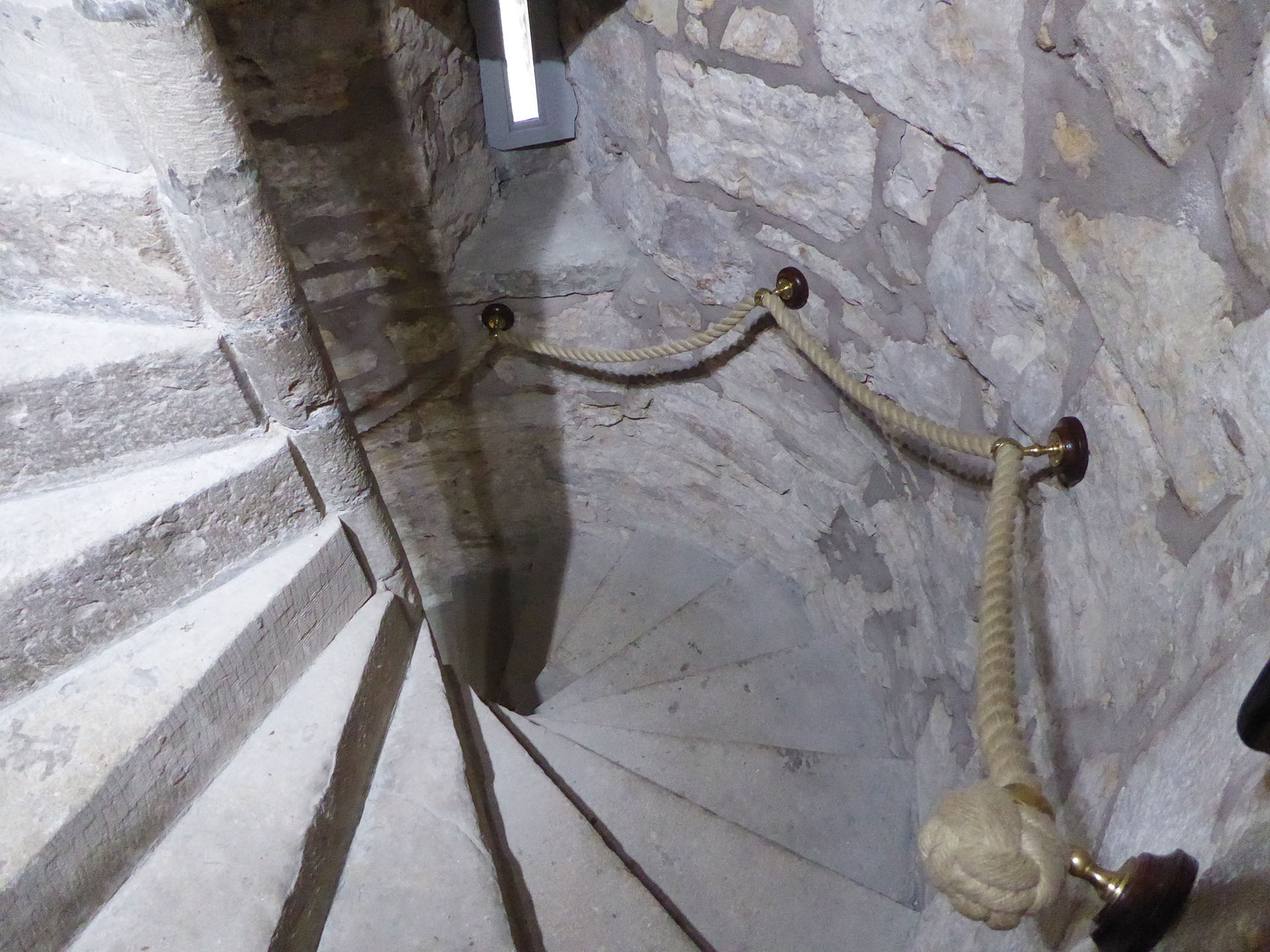 There is one member of the family that even Johnnie of Gilnockie might agree was the most famous of them all. ‘The Moon Man’, as Neil Armstrong is affectionately known locally, came to this part of the world in 1972. He visited the nearby town of Langholm. Then he came here, to discover more about his reiving ancestors. At Gilnockie Tower he stood on the outside walkway, a place from which his fighting forebears might have viewed the moon as they prepared to carry out a raid! 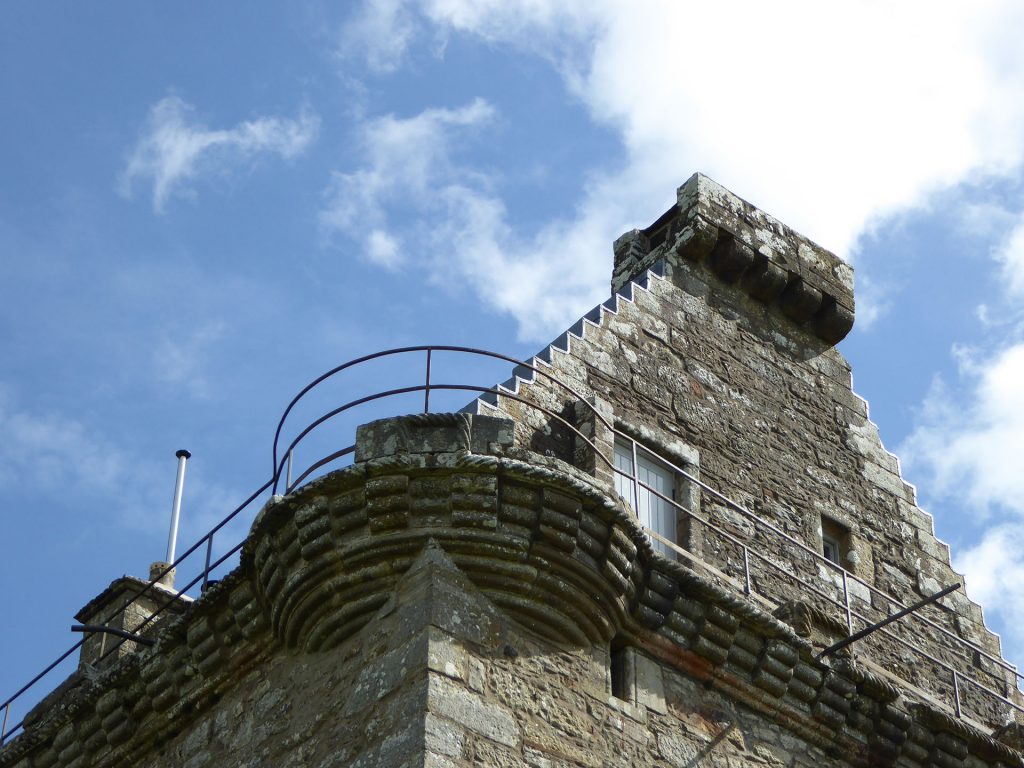 So, as Neil Armstrong asked when he was here – where does the name Armstrong come from? The original border pronunciation would probably have been ‘Airmstrang’, but myth says a man named Fairbairn (a Norse name) once helped a king back onto his horse during a battle. For his efforts he was called Arm-strong. That is a legend. What we do know for sure is that Armstrongs came to the Borderlands hundreds of years ago and quickly established a reputation for fighting. This was not a clan to trifle with!

“My pleasure is not just at the honour accorded me in this the land of Johnnie of Gilnockie, but as the genuine feeling I have among those hills, and more particularly among these people.”
Neil Armstrong
Astronaut

We are proud to have items relating to Neil Armstrong’s journey to the moon – and his visit to Langholm. The most eye-catching is the impression of his moon boot. Neil was welcomed as a son of Langholm and given the freedom of the ‘Muckle Toon’. There were great celebrations when he came and one of the local mills produced a lunar tartan in recognition of his achievement.

The Armstrong Air and Space Museum (armstrongmuseum.org) in Ohio, USA.

The Armstrong Air and Space Museum (armstrongmuseum.org) in Ohio is located in the Wapakoneta-St. Mary’s area of Ohio, USA, Neil’s hometown. His parents still lived there at the time of their son’s historic moon walk.

Dedicated in 1972, the Museum houses aircraft flown by Neil Armstrong, the Gemini VIII space capsule, and artefacts from the Apollo 11 mission, including a moon rock. The interactive simulator is quite realistic.

The museum also honours Ohio’s contributions to aviation and space from early pioneering day’s though to the space shuttle era.

Wapakoneta, St. Mary’s, and the Museum are host to a variety of educational and historic events all year round. The Museum ( armstrongmuseum.org) opened a recently completed expansion in 2019, on the 50th anniversary of Neil Armstrong’s historic moon landing. Please check out the website, ( armstrongmuseum.org )for further information.

Gilnockie is rubble-built and defensive. It was constructed to house an important family - possibly a Borderland chieftain - and to protect them against attacks from other reivers. These riders and raiders had ‘a persuasion that all property is common by the law of nature - and is therefore liable to be appropriated by them in their necessity.’

Did Johnnie Armstrong and his family gather in this room? Whilst we cannot be sure this was the tower in which he lived, it’s the one that appears in the background of paintings of the infamous reiver. This is the tower in the artwork that shows Johnnie setting off on his fateful last ride. ‘The Ballad of Johnnie Armstrong’ tells the tale...

The tower is built from limestone and sandstone. The inner and outer walls have a cavity between them which the builders filled with stone, rubble and wood. This might have provided insulation, or it may have given the walls resilience in case of cannon attack. Well-organised labour was needed for construction because some of the blocks are very large.

When Was Gilnockie Tower Built?

Gilnockie was built around 1519 – 20. We know it was probably one of the places that came under attack during a raid by the English in 1528. We can’t say with absolute certainty who built it, but tradition links this place to one of the most famous and feared Reivers of the border. Is this the tower that a powerful rider and raider called Johnnie Armstrong called home? Did he go from here on his way to a fateful meeting with King James V of Scotland?

How do you get to Gilnockie Tower?

If you can, please phone us to advise when you are on route.

By Air to: Carlisle Lake District Airport (CAX) : www.carlisleairport.co.uk/ launched commercial flights for the first time in more than 25 years on July 4th 2019. Unfortunately flights into Carlisle Airport have been temporarily suspended for the foreseeable future.

The Stobart Group-own and operate the airport and teamed-up with Scotland’s Airline, Loganair, to offer air links to and from Southend, Belfast and Dublin. This opened the Anglo-Scottish Borders, Cumbria and the Lake District region to the South East of England (Southend), Northern Ireland (Belfast) and The Republic of Ireland (Dublin).  Canonbie, Gilnockie Tower and Langholm are only a thirty minute drive from Carlisle airport.

The airport, which once served as an RAF airfield, has been transformed thanks to a new and modern terminal, a new runway and taxiways, and its own Borderlands Café. The airport also offers free car parking and free mini bus connections with Carlisle Rail/Train Station. Flights are on sale via www.loganair.co.uk, including 20kg baggage allowance.

Also by Air to: Edinburgh (EDI), Glasgow (GLA) and Manchester (MAN) are three airports that have direct Rail Links with the Historic City of Carlisle (https://www.discovercarlisle.co.uk/) and its city centre Rail Station.

By Road: Arriving from the North or the South at Junction 44 on the M6 motorway at Carlisle, Cumbria you will join the A7 scenic route from Carlisle to Edinburgh, and Gilnockie Tower is only 14 miles from Junction 44.
Joining the A7 scenic route from Edinburgh to Carlisle in the Edinburgh area, follow
the City Bypass, and then join the A7 at the Sheriffhall Roundabout, you have 60 miles to
travel to Gilnockie Tower, but you will pass through the lush green countryside of the Scottish Borders.

If you are passing through the A75 South West Scotland corridor, join the A7 at Longtown, turn left to drive north. The A7 Carlisle to Edinburgh Scenic Route passes over Scots Dyke, the English Scottish Border, then on to Gilnockie Tower. This route takes you through some of the darkest and extraordinary periods in the Anglo-Scottish Border Reiver life throughout the 14th to 16th centuries of Anglo-Scottish historical development. 14 miles north of Carlisle, or 4 miles south of Langholm, follow the brown information signs, ‘Clan Armstrong Centre’, on the A7 Canonbie by-pass. These signs will direct you to Gilnockie Tower and the Clan Armstrong Centre. Look out for the Gilnockie Tower sign on the left and to the right is a bleak 500 year old Scots Tower House; Gilnockie Tower is located deep in the Esk Valley.

Via the X95 Bus/coach: The outstanding  Borders Buses X95 service from both Carlisle (Scots Dyke) and Edinburgh stopping at the Gilnockie Tower and Clan Armstrong Centre road end is reduced to a limited service, again for the foreseeable future. The Carlisle bus leaves from the stance outside the Carlisle Rail Station, and the Edinburgh bus leaves the City Centre Bus Terminus/Station, near to Waverley Rail Station. For up-to-date information and a bus timetable please check out:- www.bordersbuses.co.uk/services/X95.

Just let the bus driver know you want off at Gilnockie Tower/Clan Armstrong Centre, and the driver will do everything to help you. You pick up your return journey at the same stance, but the other side of the road. Hold your hand out when the bus is in sight, and the driver will stop for you. The X95 team are excellent and very caring for the customers they have.

We use cookies to ensure that we give you the best experience on our website. If you continue to use this site we will assume that you are happy with it.Ok